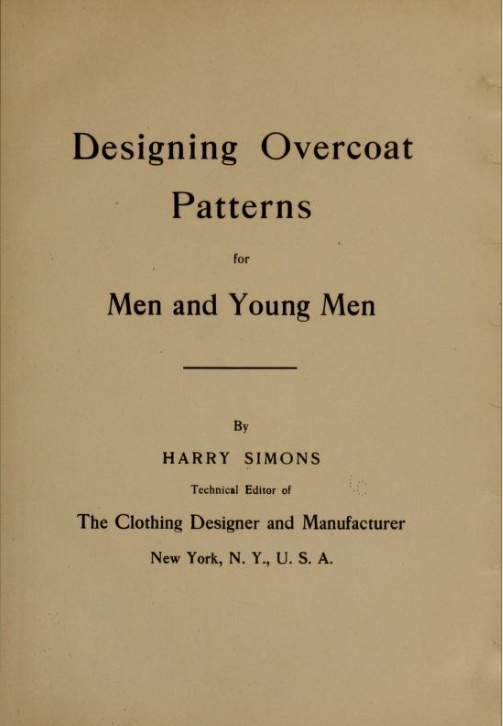 David recently sent us a link wanting to come to classes and work out some of the finer points in the drafting instructions for an early 20th century men’s overcoat from Designing Overcoat Patterns for Men and Young Men by Harry Simons published by The Clothing Designer and Manufacturer, NY, NY, 1916.

This is an interesting early 20th century booklet that helps you draft some of the coats that were popular in the years leading up to WWI.  The cuts are more in line with generous Victorian tailoring with flared skirts rather than the pared down shapes popular after the war.

The booklet itself is easy to read if you have had a drafting class or two or are close enough to your high school geometry years that you still remember basic line and point proofs, but the average sewer will find it a bit of a challenge.

Overall worth a look if you have a taste for vintage or antique men’s clothing.

Some of the more interesting drafts are:

The Military Mackinaw (pp 42-43): A great jacket pattern that resembles WWI era doughboy military jackets.
The Young Men’s Novelty Overcoat (pp 40-41): A pinch-waist flared coat with an almost regency-revival feel.
The Men’s Cape (pp 30-31): For your next top-hat heavy soirée.
The Balmaroon (pp 22-23): The most recognizably modern coat in the booklet with 2 part sleeves that have the upper seam running down the shoulder and on top of the arm rather than behind it – a nice fitting compromise between a raglan and set-in sleeve.

The booklet does not include sewing instruction, but the language is cleaner than a lot of English tailoring manuals that were written just 10-15 years earlier.

Incidentally, The Clothing Designer Company was serious business – it wasn’t unusual for people to run small cottage businesses from their homes or small offices (our workroom’s building was originally built for small businesses like this); organizations like this helped facilitate that.  The magazine/journal itself cost US$3.00 every 6 months, or the equivalent of $65.00 every 6 months today.  They weren’t playing around here. You may want to poke through the archives at The Library of Congress to see what else you can find if you are interested in learning more about early 20th century tailoring or historical costume.

There are also tons of things that have been digitized by Google and others – copy and paste this line:

Then add whatever else you’d like to add in parentheses to see what specialties you can pull up.  There is a ton of stuff there. We live in amazing times, folks.